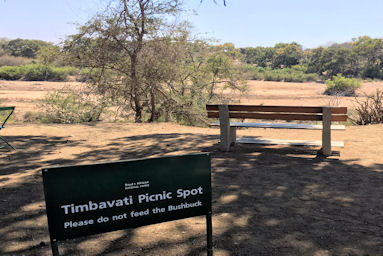 The Kruger National Park is a South African treasure much loved by locals and tourists alike.

Here is a guide to the origin of the names of the Kruger Park rest camps.

The camp was named by the section ranger at the time, JJ Coetzer. The name Punda Maria is a combination of Punda (as in Punda Malia – Swahili for Zebra) and Maria which was the name of his wife. It was assumed that JJ Coetzer had meant Punda Milia and the name stuck until 1981 when the correct facts were established and the original name reinstated.

There is the possibility that the name Punda Maria is a corruption of the word Phande Mariha, which means ‘border of the winter’ in Venda. The area is said to have been called by this name years before JJ Coetzer was ranger.

Shingwedzi is located in the Northern reaches of the Park and a favourite for many people. It is not known exactly where the name originated from however it seems to be derived from the Tsonga word “Ngwetse” which means “the sound of iron objects rubbing together”.

The letaba restcamp is located about 50 km east of Phalaborwa and is named after the mighty Letaba river. The name letaba means “sand river” from the Sotho word Lehlaba.

The Olifants restcamp is situated on a hill overlooking the Olifants river, where the camp gets its name. The Olifants River (River of Elephants) is the largest perennial river that crosses through the park from west-east.

Skukuza is the administrative headquarters of the Kruger Park and where all the important decisions are made. The camp itself is quite large, the biggest in the Park, and is located on the banks of the Sabi river. The name Skukuza is a corruption of the Zulu work Sikhukuza “the one who sweeps clean” and was given to the first warden of the Kruger Park Col James Stevenson-Hamilton who was given the task of removing local inhabitants from the area inside the park. The word is carried over from Zulu by the Tsonga people who make up the majority of the early inhabitants of this part of the park.

Satara restcamp lies on the central plains of the Kruger National Park, in an area teeming with wildlife. The name is actually a misspelling of the hindi word Satrah which means “seventeen”. This was the name of the farm which was surveyed and the name handed over to J Stevenson Hamillton by the surveyor who had an Indian servant.

The Pretoriuskop restcamp, located 9km east of Numbi Gate is one of oldest camps in the Park, built in 1928, in the section of the park overseen by one of the Pioneering section rangers, Harry Wolhuter. The camp itself is usually fairly quiet and has a pleasant atmosphere.

The camp gets its name from the nearby hill. There is slight debate as to the exact origin of the name but it is generally accepted that the hill was named after Willem Pretorius, a member of the Karel Trichard voortrekker party to Delgoa Bay who passed through the area in the 1840’s. He was dangerously ill en route to Delgoa Bay and it was decided that he should return to Orighstad for treatment, accompanied by 2 shangaan members of the party. Sadly he died before they arrived, near the hill, and he was buried there by Joao Albasini.

Lower Sabie is located downstream of the Skukuza restcamp on the sabie river. The name sabie is an Afrikaans word from the original siSwati word sabisa “to be careful”. It was always believed that this was in reference to the many crocodiles in some parts of the river but according to Hans Bronman the name actually refers to the slippery nature of the rocks in the river as the upper reaches of the river don’t appear to facilitate crocodile biology.

Berg-en-dal is a charming camp situated in the south-western corner of the park in an area with some of the biggest hills in the park, unlike the flat plains of the central regions. The name was given by Dr U de V Pienaar in 1983 and is an Afrikaans word which means “hill and dale” a beautiful description of the area.

The crocodile bridge restcamp is located in the south eastern section of the Kruger Park in close proximity to the Crocodile river where the old selati railway bridge crosses the river. The river serves as the southern boundry of the Kruger National Park.

There’s Plenty to do in the Area
Explore the area.